Save the Date - January 21, 2020 - 6PM
Keynoter: Mayor Mark Murphy on Council districting and other issues before Old Towne in 2020. Come early for no-host cocktails/dinner in the Streamliner Lounge.
RSVP for General Meeting
Click to RSVP for OTPA on the Road! 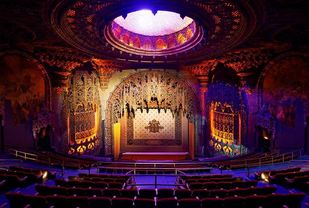 We’re excited to announce that our next On-the-Road Discovery Tour will explore the great Broadway movie and stage show palaces that once made downtown Los Angeles the entertainment center of Southern California. Massive department stores and magnificent theaters drew generations of Angelenos to the city center.

​Still a lively shopping street, Broadway is now a hub of adaptive reuse projects that have turned office buildings and department stores into housing, dining, retail and nightlife destinations.

A Docent from the Los Angeles Conservancy will personally escort and tour the group through this National Historic District and learn about Broadway’s evolution and ongoing revitalization.  We’ll leave the parking lot behind City Hall at 9:00 am and travel by luxury coach to downtown. After, enjoy a no host lunch downtown before returning to the Orange City Hall after 3:00 pm. This is an exterior walking tour on city streets and the tour route includes hills, uneven pavement and steps.

Note: Subject to availability, the tour visits the interiors of one or more of the following: the Los Angeles Theatre, The Theatre at the Ace Hotel (formerly United Artists Theatre), and the Orpheum Theatre. Yet we do not guarantee access to any theatres.

Photo Credit: Courtesy of The Gamble House, USC. Photograph © Alexander Vertikoff.
Join our docent guided tour of an outstanding example of American Arts and Crafts-style architecture, designed by Charles and Henry Greene in 1908 for David and Mary Gamble of the Procter & Gamble Company.

The tour departs Orange City Hall in a luxury coach at 9:00 am, returning at 2:00 pm. We’ll visit the legendary interior rooms and see the magnificent gardens spreading over the home’s manicured grounds. Afterwards we’ll enjoy a no-host lunch in Historic Old Towne Pasadena.

Come explore historically significant downtown Los Angeles and enjoy a great overview of the city’s history and architecture from the eighteenth century to present.

Our tour will be narrated by a Docent from the respected Los Angeles Conservancy, and feature legendary L.A. landmarks, ending at the 81-year old Clifton’s Cafeteria where we’ll enjoy lunch.

THE BRADBURY BUILDING is still splendid more than 100 years after opening in 1893.
Its magical light-filled Victorian court, open cage elevators, marble stairs, and ornate iron railings make this one of downtown's most photographed icons. It is the oldest commercial building remaining in the central city and one of Los Angeles’ unique treasures.

ANGEL’S FLIGHT™ RAILWAY is one of LA's most enduring landmarks. It opened in 1901 as the world’s shortest railway. It carries passengers up and down the steep slope between downtown and the top of Bunker Hill, one of Southern California’s most fashionable residential neighborhoods.

GRAND CENTRAL MARKET has been serving customers continuously since 1917. This 30,000 square-foot arcade includes an amazing food emporium and retail marketplace. A hundred years ago, Victorian mansions covered Bunker Hill and the residents rode down on Angels Flight to shop for groceries in this market’s open air arcade.

CLIFTON’S CAFETERIA is an icon of downtown Los Angeles, and where we’ll stop for a no-host lunch. It’s considered the world’s largest public cafeteria and the only one remaining from the Golden Age of cafeteria dining.  Since opening in 1935 it has enchanted diners in a forest-themed wonderland, which is said to have inspired everyone from Walt Disney to writer Ray Bradbury.

WE’LL TRAVEL IN A LUXURY COACH leaving the Orange City Hall parking lot at 9:00 am and returning around 4 pm after lunch. Space is limited so make your reservations now!

Click to Enlarge
​2018 Annual Meeting  OTPA began the new year with its 32nd annual membership meeting. Mayor Tita Smith, one of OTPA’s founders, told the full house audience at Ruby’s Diner how OTPA started back when several historic structures were being torn down and lost forever. OTPA was formed to prevent other structures from demolition and thus began the preservation movement in Old Town.

Chapman University VP of Campus Planning and Operations, Kris Eric Olsen, brought members up to date on the huge inventory of new housing soon to be available to students at the recently acquired Chapman Grand apartments on Katella, and the soon to be constructed Villa Park Packing House Residence Village.

Noted Orange historian, Phil Brigandi, talked about how Old Towne is the core of neighboring communities in Orange County, and amazed the audience with a story about the Chinese laundry that, decades ago, was located on the current site of the Friends Presbyterian Church. 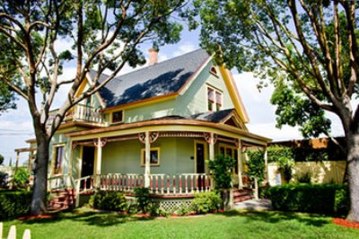 This popular, self-guided exploration of Old Towne homes returns for two days this fall. We’re selecting homes now, looking for the most interesting in Craftsman, Victorian, Mission, Bungalow, Revival and other historic styles found in Old Towne. Email tour chair Joe Peters if you have ideas or would like to volunteer. Tickets are $25 per person for non-OTPA members, and just $20 for members.

OTPA’S membership meeting featured the university’s VP of Campus Planning and Operations, Kris Eric Olsen, taking us on a sneak preview tour of the 135,000 sq. ft. Science and Technology Center currently under construction at Center and Walnut. Afterwards, refreshments were enjoyed while Kris briefed us on what else is underway, including the latest on what’s planned for student housing projects. Photos below!

Following our successful 2015 tour of Pasadena’s famous Gamble House, OTPA was recently on the road again for another successful event—this time to the Mission Inn in Riverside. Keep an eye on this page for upcoming OTPA "On-the-Road" events!

OTPA Champagne Reception and Gallery Tour of Chapman’s new Hilbert Museum of California Art, soon to open across from Ruby’s and the train station was once again, a huge success. Special thanks to OTPA board member Guy Hinrichs for putting it all together!

Mark Hilbert, donor of 104 spectacular "story telling" portraits of California history to Chapman University, personally narrated a tour of his collection for OTPA members in Chapman's new Mark Hilbert Museum. It was a special pre-opening tour and a OTPA's biggest General Meeting in years with more than 100 attending.
​
Experience California Scene, an art genre portraying our history from the '20s to now:  people and places, towns and cities, farms and ranches, marinas, factories, train stations, parks, freeways and the lure of the open road.

Click to Enlarge
​The Musco Center for the Arts Tour was a huge success! Arranged by OTPA's Education and Research Board member, Guy Hinrichs, the tour of the world-class facility was led by Kris Olsen, Chapman University's V.P. of Campus Planning and Operations and concluded with a reception in the adjacent chapel. The attention to detail and thought put into this magnificent facility will be enjoyed by Chapman students and Old Towne Orange residents for decades to come!. See additional photos on OTPA's FaceBook page by clicking here.

​The Gamble House tour in Pasadena on Saturday, June 27, 2015 was a rousing success per the 30 or so adventurers who made the trip in luxury on a chartered motorcoach.

Step back in time and join us as notable Orange historian, Phil Brigandi, recounts anecdotes about Orange's historical heritage. The master storyteller will share stories of other crops, communities, enterprises, and even civic arson that are also part of the history of Orange we all know.

Phil Brigandi has been researching and writing local history since 1975, with a special emphasis on his hometown of Orange. He is the author of two dozen books, including his book on historic homes in Orange, "A Place Called Home, Orange's Architectural Legacy".