The Old Towne Preservation Association has nominated a 15-member Board of Directors for 2020, adding three new members.  The slate will be put up for approval at OTPA’s 33rd Annual Membership Meeting set for 6:00 pm on January 21 at Ruby’s Diner at the Old Towne Metrolink station.

The annual meeting will include remarks by Mayor Mark Murphy on key issues before the City in 2020, such as council districting.

The nominations include officers, committee chairs and members-at-large:

New Board members are Old Towne residents Alia Gerard who will assist with OTPA’s web and social media outreach; former OTPA President and City Councilman Dan Slater; and Mignon Whitaker, a Board member of the Community Foundation of Orange.

The annual membership meeting January 21 is open to the public and will begin at 6:00 pm with a no-host reception with friends and neighbors in Ruby’s Streamliner Lounge, followed by the business meeting in the banquet room.   Many come early or stay late to enjoy dinner.
Click to RSVP for General Meeting

Additional Info Under Menu Item "Events"  and "News" (Above) 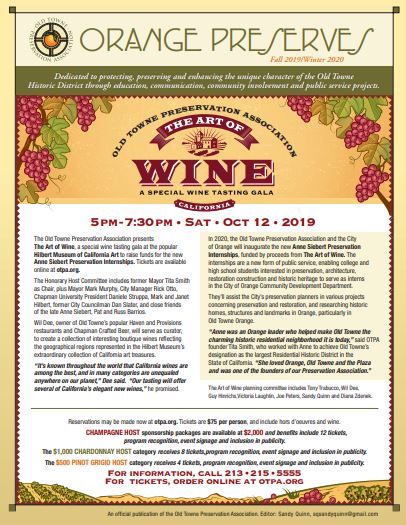 How We Fulfill Our Mission